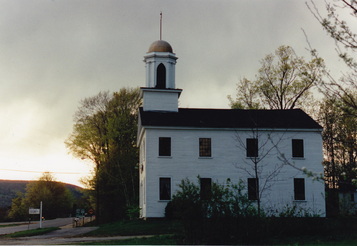 Located at the intersection of Parker Mountain Road (NH Route 126) and Strafford Road (NH Route 202A), Austin Hall is the home of the Strafford Historical Society.  It was built in 1833 as the Strafford Union Academy, and later became the Strafford Seminary, associated with the Freewill Baptist Church.  In 1866, the name was changed to Austin Academy to commemorate a bequest from Rev. Austin, later changing to Austin-Cate Academy to honor yet another benefactor.  The Hall remained an important part of the academy, and also became the home of the Parker Mountain Grange No. 299.  In 1983, the Strafford Historical Society was organized to take control of this lovely building, rehabilitate and maintain it.  Members of the Society devoted innumerable hours to restoring windows, painting and rewiring.  Donations, coupled with the generosity of contractors, allowed the society to install kitchen facilities and set up meeting and exhibition spaces. Continuing generosity of our donors has made it possible to qualify for a  2010 grant from the Land and Community Heritage Investment Program to complete extensive repairs to the bell tower and to complete foundation repairs and other safety improvements to the Hall, while preserving original elements as far as possible.

Austin Hall is listed on the National Register of Historic Places.  The second floor, renovated as exhibition space, has been dedicated to the memory of the late Lillian Foss Cooper.  The museum is open at designated times during the year, and is always available for special tours by contacting the Society.     The first floor has been named Alumni Hall in honor of generations of Austin-Cate graduates.  The Roger Leighton Meeting Room on the first floor is used for group meetings and special events such as ham and bean suppers or the annual Strawberry Festival.